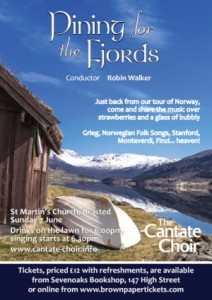 In late May, The Cantate Choir went tour again, this time to Norway.  See the news pages for pictures of the trip. They  gave a concert in Bergen cathedral after which they travelled to the heart of Norway to rekindle their friendship with The Førde Kammerkor to perform there. This choir came to sing with Cantate in Sevenoaks in October 2012.

Once returned the choir reprised the repertoire from the tour to present to an Audience at St. Martin’s Brasted. The concert included performances of Grieg, Norwegian folk songs, Monteverdi’s Beatus Vir, Weelkes, Morley, Stanford and Vaughan Williams, performing madrigals outside on a lovely summer’s evening before moving into the church for the rest of the concert.