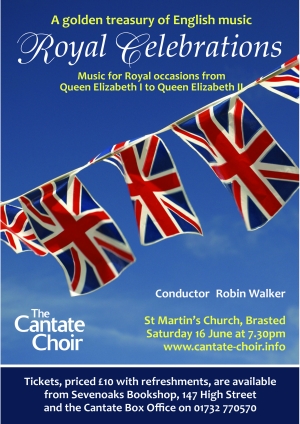 Parliaments and Ministers pass, but she abides in lifelong duty, and she is to them as the oak in the forest is to the annual harvest in the field.

These words could have been said of Queen Elizabeth I or II but in fact were written by William Gladstone of Queen Victoria. We have been particularly fortunate in this land in our female monarchs, who generally steered us through times of great prosperity and advancement. Even Queen Anne gave us chairs! Hopefully, therefore, you are sitting comfortably for this programme of Music for Royal Occasions, which really does open up a treasury of English music at its finest.

I will not go into the biographical details of tonight’s composers but it is possible to trace unbroken threads of connections like a family tree from our earliest 16th century piece, Rejoice in the Lord Alway, to the most recent, Ubi caritas, by Paul Mealor. These threads have touched composers, performers and listeners alike over five centuries and epitomise the English cathedral tradition, which was and remains unique in the world.

Redford, Gibbons, Bateson, Boyce and Wesley worked as organists in the leading cathedrals. Gibbons, Purcell, Handel, Parry, Vaughan Williams and Mealor have associations with Westminster Abbey, home to the unique pageant of British history. Purcell was influenced by the Tudor masters. Handel learned from Purcell and Parry taught Vaughan Williams at the Royal College of Music. Oxford, Cambridge and York are common places of learning. Four of the ten composers were members of the Chapel Royal, the monarch’s official body of musicians, and three others contributed pieces to royal collections in praise of their queens. Our island setting has meant that, while not averse to absorbing some continental fashions, British composers have always been aware of the best work in our own musical and spiritual centres. Composers preserved aspects of style and emotional language, which are distinctive, and developed a knack for setting our language sympathetically.

There was a gap in proceedings in every sense with the Civil War and Interregnum which followed the death of Charles I. A puritan Act, passed in 1644, required the removal of all superstitious monuments, which included organs from places of worship. At the time of the restoration of the monarchy in 1660, there was also a lack of choristers and other musicians. Charles II embarked on rebuilding the stocks of music, musicians and instruments, starting with the Chapel Royal. Perhaps William Boyce’s greatest legacy was the compiling of some 300 years of compositions in score rather than part format for the first time in a book called Cathedral Music. And so the legacy continued.

Best known as a writer of straight-forward but engaging symphonies, Boyce was tasked with writing all the music for the coronation of George III in 1761, something never asked of the Master of the King’s Musick before or since. He recycled music from George and Charlotte’s wedding just two week’s earlier and refused point blank to do a new setting of Zadok the Priest, saying that ‘it cannot be more properly set than it already has been by Mr Handel’.

George Frederick Handel was the most cosmopolitan and a foreigner to boot (not that we have ever worried about adopting foreign talent as our own if it suits) and he did struggle with the nuances of the language. However, he above all others was master of the grandiose effect. No wonder then that the anthem, Zadok the Priest, which was originally composed for the coronation of George II in 1727, has been used at every coronation since and still exhilarates however often you hear it.

Queen Mary II (as in William and Mary) was a bit of a rebel. Daughter of catholic James II, she married protestant William of Orange and then, just to rub salt in the wounds, overthrew her father in the Glorious Revolution. While this made her something of an irritant in official circles, it made her very popular with the masses. After ruling jointly with her husband for five years, she died of smallpox in 1695. Purcell’s setting of the Funeral Sentences from the Book of Common Prayer really is the most priceless gem in our treasury. ‘Man that is born of a woman hath but a short time to live and is full of misery’. Together with those in the King James’ Bible, such words resonate in every English person’s soul and enrich our language. Purcell’s mastery of melodic invention, clear structure and chromatic intensity harnesses and articulates the mood of a nation, unaccustomed to emotional outpourings at the best or worst of times.

Parry and Wesley worked at a time when cathedral music was in a slump and the continental giants of Romanticism were doing things very differently. Nonetheless, their works have measured class. And what of Paul Mealor? Is the tradition safe in his hands? There is a reminder of plainchant here and the dissonances, like those of Gibbons, are interesting not aggressive. Above all the emotion is one of calm warmth and assurance. Just what you would expect from a Welshman, educated in York and working in Scotland with five hundred years behind him!