Hilmar will perform with the choir at it’s Christmas with Cantate concert in December 2005.

Hilmar Hauer comes from Dortmund, Germany and studied trumpet with Prof. Adolf Weresch at the Musikhochschule Karlsruhe, Germany. Work experience include performances with the Linden Baroque Orchestra (on natural trumpet)

Amadeus Orchestra (based in Manchester), National Musicians Symphony Orchestra (NMSO), London and Live performances of concertos by Haydn, Hummel, Neruda, Arutiunian,, Vivaldi, Telemann, Bach and others. Recent performances include Jan Koetsier, Concerto for trumpet, trombone and orchestra. Between 1996-1999 he performed regularly with the Badische Staatskapelle (orchestra of the opera in Karlsruhe) and then with the Südwestdeutsche Philharmonie Konstanz. He was also principal trumpet of the Heeresmusikkorps Stuttgart)

Claude will perform with the choir at the Christmas with Cantate concert in December 2005.

Trumpeter Claude Lamon was born in South Africa, where he has performed with numerous orchestras and ensembles, including the KwaZulu-Natal Philharmonic Orchestra and the National Chamber Orchestra. Through his work, Claude became involved with music education in local townships, recognising the importance of nuturing musical skills and creativity. A french national, Claude obtained a Prix de Trompette et Musique de Chambre, studying under international soloist Pierre Dutot. In Germany, he performed with the Orchestra at the Bayreuth Festival.

Moving to the UK in 2002, Claude became particularly involved with chamber music, appearing as a soloist with soprano Sara Egan and Suzanne Anderson in performances of Bach’s Cantata 51. Enjoying work with new composers, including Oxford’s John Caldwell, Claude is currently working on repertoire for trumpet and voice. Other interests include promoting French music, and providing a platform for South African composers and musicians, a passion reflected in the repertoire and artists of Voce Ensemble.

Recent appearances include soloist performances in Vivaldi’s Double Trumpet Concerto and Handel’s Suite in D, at the Edinburgh Fringe Festival and Glasgow’s Royal Academy of Music and Dance. Bringing his expertise to the local community, Claude teaches trumpet at schools in the Sevenoaks and Tunbridge Wells areas, and coaches the Lydian Orchestra, West Kent’s premiere youth orchestra. 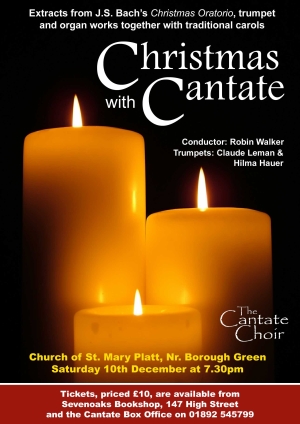