Anne played for the choir during its Rossini Petite Messe Solennelle concert in March 2011. 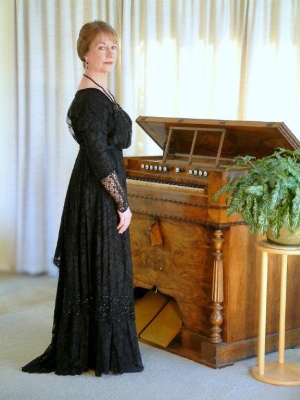 Anne Page is known in the UK and abroad as a musician who combines virtuosity and versatility. Born and educated in Perth, Australia, the music of Bach first awakened an interest in the organ. Her teacher at the University of Western Australia, Annette Goerke inspired her to study French organ music from the 18th century to Messiaen, and to travel to Europe for lessons with Marie-Claire Alain. Anne subsequently studied with Peter Hurford for whom she deputised in a teaching role at the Royal Academy of Music. Her London debut at the Royal Festival Hall in 1988 playing 20th century masterpieces marked a commitment to contemporary music which led to commissions and premieres of new works. Lessons with Jacques van Oortmerssen on historic instruments, their repertoire and playing techniques were to inform both her playing and teaching.

As a member of the British Institute of Organ Studies she has been closely involved with the Historic Organ Sound Archive, playing an essential role in its organisation as well as researching and performing over 10 hours of recordings for the project. The HOSA project has been a pioneer of free internet access to classical music. She continues to give talks to organists’ associations about this innovative resource for the study of English organs and their music and has contributed articles on its use to several organ journals.

She has been at the forefront of the revival of interest in the harmonium, an instrument only recently receiving attention from scholars, composers and musicians as a serious medium for historical performance as well as for contemporary music. Swiss organist and composer Lionel Rogg has dedicated a suite of pieces for harmonium to her. She is acknowledged as one of the country’s leading experts and has appeared as soloist at the Edinburgh, Three Choirs and Oundle Festivals.

In 2002 the Royal Academy of Music invited her to establish a course in Harmonium, the first in modern times at any conservatory in the UK. She therefore succeeds Lemmens as Professor of Harmonium, who was appointed at the RAM in 1869. In 2008 she gave a full-length harmonium recital in the Purcell Room, the first time the instrument has been featured in a solo role on the South Bank. During eight years (1987-1994) as Artistic and Executive Director of the Cambridge Summer Recitals she programmed many first performances of new works and invited several distinguished recitalists from abroad to give UK debut recitals. Gaston Litaize, Louis Thiry and Olivier Latry gave masterclasses in addition to their concerts. Anne has more recently been instrumental in founding the Cambridge Academy of Organ Studies which presents regular study days with distinguished scholars and teachers and an annual summer course in Cambridge. She teaches a wide range of students including organ scholars at the University of Cambridge and gives classes on the RCO Easter course and the Oundle summer school.