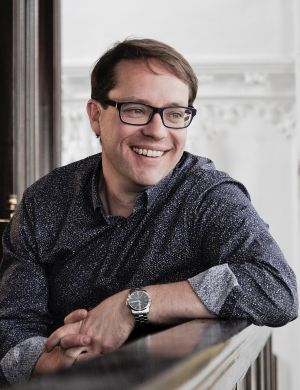 Robin Walker has conducted Cantate for the past eleven years, leading them in repertoire from the Mediaeval to the present day. Highlights include Handel’s Messiah, Haydn’s Creation, Mozart’s Requiem and Renaissance Revealed, an evening of Italian polyphony with instruments and projected images.

Robin Walker trained at the Royal Academy of Music, where he studied Organ with David Titterington and Patrick Russill. In six years of study there, he won the organ recital and ensemble prizes, prizes for choral conducting and church music, gained his teaching diploma, his bachelor’s degree with honours, postgraduate diploma with distinction, and was awarded the DipRAM (year 2000). Whilst at the Academy he also took supporting vocal studies and sang with the Academy chamber choir.

Robin enjoys a healthy mixture of solo work, church work, ensemble playing and teaching, on the organ and harpsichord, and conducts the Cantate chamber choir and its sister period instrument ensemble Vivace! in Kent. In recent years he has given recitals in Italy, Norway, Germany, Finland, the UK and the USA.

A keen interest in working with living composers has led to a close partnership with New Mexico-based Frederick Frahm, with whom Robin has recorded two discs of his music in Albuquerque. He has also released acclaimed discs of the music of Lakeside composer John Ellis and Byrd to Blow – the English Baroque Organ, recorded on the restored Baroque organ of St Giles in the Fields, London, where he served as organist for five years.

For three years Robin was organist of La Badia Fiorentina (Florence’s 10th century Abbey church), where he trained the monastic choir and played the 1558 Zefferini organ, overseeing the restoration of that instrument in 2013. While there he gave numerous recitals demonstrating the 16th and 17th century Italian repertoire alongside contemporary music of other European schools. Plans are in motion to record a CD demonstrating the instrument.

As conductor of the Cantate choir for over ten years there are many highlights, especially this year winning the Top Choir Kent choral competition in Canterbury and having the chance to take part in the Canterbury Festival in October. In March 2014 he directed them together with His Majesty’s Sagbuts and Cornets in a concert of European Renaissance music, ending with Tallis’ Spem in alium. Robin has conducted the choir together with their partner period instrument orchestra Vivace! in J.S. Bach’s B minor mass and St John Passion, Mozart’s Requiem, and Hadyn’s Creation.

Robin is now Assistant Organist at St George’s, Hanover Square in central London, where he accompanies the professional choir on the newly installed Richards, Fowkes and Co. organ.

Robin is in demand as recitalist, continuo player and teacher. Later this year he is performing in London, Malta, a masterclass in Norway and plans for a concert tour to Los Angeles.