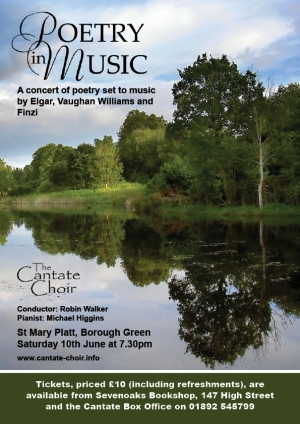 There is music in the air, music all around us, the world is full of it and you simply take as much as you require. Sir Edward Elgar

Of all the arts, we have excelled in literature. Our flexible language wants to persuade and enlighten, to uplift and censure. There is an unbroken tradition of great English writers from medieval times to modern day. No other country can boast the heights of the King James Bible or Shakespeare and it is no coincidence that they go with you to your desert island.

In music and the visual arts however, we have some peaks and troughs. From the death of Henry Purcell to the birth of Edward Elgar, we were almost silent. Until Turner, Constable and Blake got to work, we were a blank canvas. The work of our great Tudor composers was generally less cluttered and ornamented than our southern European counterparts. English and Dutch painters have generally reflected the cooler, gentler climate and landscape, which we still recognise today. Perhaps this love of our natural world around us, a land without extremes, meant that neither the contrived formality of Classicism nor the bolder temperament of Romanticism appealed to our northern phlegm. Or perhaps we were just too busy taking over the world!

The period from the late nineteenth century through the major part of the twentieth is therefore seen as the English Musical Renaissance: Standford, Elgar, Holst, Vaughan Williams, Delius, Finzi, Bantock, Bax, Quilter, Ireland, Tippett, Walton, Britten, Arnold, Bliss, Bridge, Warlock, Mathias… All of a sudden, the pantheon seems more extensive than anything the French, Germans or Italians have to offer! And yet, many of our finest composers were, and indeed still are, slow to be performed regularly abroad. Why? Most probably because each of them reflects, and reflects upon, that uniquely island character, which sets us apart in so many things.

They choose the wistful, modal qualities of British folksong, images of our rolling hills and gentle streams, our birdsong and our freedoms. They turn naturally to the poetry of our English heritage, with its easy rhythms and gentle consonants. Do they never get worked up? Oh yes, when it comes to notions of justice, pride and the reaching of goals, the grandeur comes through. And that renowned English wit can be found a-plenty in satirical dance forms and quipping rhythms.

So this is the fertile soil from which our concert springs.

William Mathias, as it happens, was Welsh. Born in Dyfed in 1934, he studied in Wales and London, worked mostly in Bangor but regularly involved himself in the great choral festivals which gave birth to so much great work.

He set the eight songs from Shakespeare plays for mixed choir and piano for the third Cardiff Festival of Choirs in 1979. Although all different in origin, he says he saw them “as a linked set like a song cycle. This concept is emphasised by the fact that the last song recalls some of the music of the first; both are winter poems. There is also a similarity of feeling between the settings of Full Fathom Five and Dirge from Cymbeline. No.3 is for men only and proceeds immediately to Sigh no more Ladies for women’s voices only. The piano part is integral to the whole helping to emphasis the different moods. It is particularly helpful in highlighting Shakespeare’s love of bell sounds to indicate the passage of time and the transience of human life.”

Vaughan Williams frequently turned to the poetry of the American Walt Whitman as did so many English composers. Unlike so much poetry of the time which relied on symbolism, allegory and meditation, Whitman’s poetry exalted the body and the material world. He praised nature and the individual human’s role in it. He does not diminish the role of the mind or spirit but sees both mind and body as worthy of praise. Toward the Unknown Region was composed in 1906 using text from Whitman’s Leaves of Grass anthology. It is the quest of the mind to be accompanied by the soul as it leaves the known, temporal world for that unknown region ‘when the ties loosen, all but the ties eternal, time and space, nor darkness, gravitation, sense, nor any bounds bounding us.’

Gerald Finzi wrote mostly works for voice or chorus but his clarinet and cello concertos are well-loved also. His settings of Thomas Hardy poems are inspired. Many of the settings for mixed choir of poems by Robert Bridges are well-known individually. Tonight we perform the full set as intended. Each song sets a subtle mood from the text and makes full use of the natural rhythms of the words in defining the musical language. Several of the songs are through-composed, that is to say, they take their shape from the ongoing narrative of the text, but even in the songs with a verse structure, Finzi alters the repetitions each time to give a sense of travel through the poem.

From the Bavarian Highlands by Edward Elgar shows the good-humoured family man in fine form and makes a light-hearted finale. He and his wife Alice loved holidays in Southern Bavaria, where they frequently went with their circle of friends, many of whom found their way into his Enigma Variations. On their return, Alice wrote some folksongs in the style of Bavarian ones she had heard, which her husband amiably set with appropriately southern German music. This is the equivalent of going through someone’s holiday photo album but a great deal more entertaining.