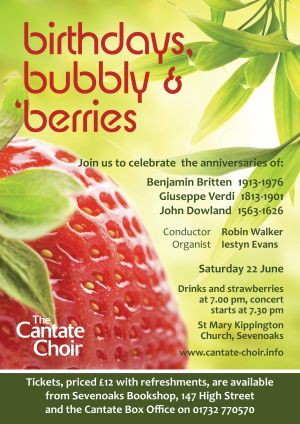 “The only thing better than singing is more singing.” Ella Fitzgerald

When the only connection between the composers in a programme is the accident of their births, the challenge is on to find a harmonious way through for the listener. John Dowland was born 450 years ago in 1563, Giuseppe Verdi 200 years ago in 1813 and Benjamin Britten in 1913, a century later. Birthdays are always something to celebrate and the fact that they are all dead does not deter us from this celebration with ‘Berries and Bubbles’. Perhaps that is a good image to have in our heads; each of the pieces tonight involves curious words or curious settings of words in short bursts. Some perhaps are persimmon, bringing an unusual taste and texture, while others, like cranberry, explode in a short, effervescent puff.

John Dowland was probably born in London but not much is known about his early life. As a Roman Catholic he was not comfortable to accept a post with the Royal Court and instead spent many years on the continent working in Paris, in Germany and for several years for the King of Denmark. He was a skilled lutenist and singer and absorbed many developments from Europe. He is primarily known for his works for lute and for his songs, many of which have a melancholic character.

Giuseppe Verdi is ranked alongside Richard Wagner, born in the same year, as the most influential operatic composer of the nineteenth century. All his music is dramatic and theatrical, including his best-known sacred work, the Requiem, written upon the death of his political friend Manzoni. He said of himself that he was the least learned of composers but this lack of formal training allowed him to exploit the orchestra and the vocalists to suit his own dramatic ends and many of his effects remain unique.

Benjamin Britten began composing prolifically as a child and had private lessons from Frank Bridge. He later studied at the Royal College of Music with John Ireland. In the 1930s he made a conscious effort to set himself apart from the English musical mainstream. Many critics of the time, in return, distrusted his facility, cosmopolitanism and admiration for composers such as Gustav Mahler, Alban Berg and Igor Stravinsky, who were not considered appropriate models for a young English musician. For many musicians, however, his flawless technique, broad musical and human sympathies and ability to treat the most traditional of musical forms with freshness and originality place him near the head of composers of his generation.

The four songs by John Dowland are a representative selection from his Books of Songs and Ayres. Many of these first appeared as songs with lute accompaniment but also were written out as madrigals for four voices. They each develop some idea about the tribulations of love and of finding the right partner but there is humour here also. For those with an ear for the double-entendre, little is left to the imagination. The four voices complement each other simply in the strophic style of his earlier years.

The four sacred works, Quattro Pezzi Sacri, by Verdi, were finally completed in 1897 and can be performed together or separately. They were not conceived as a unit and, in fact, Verdi did not want the ‘Ave Maria’ published as he considered it an exercise. It is in four sections for unaccompanied SATB choir. In each section, one of the voices slowly intones what he calls the ‘enigmatic scale’ ascending and descending, while the other voices elaborate the words in highly chromatic harmonies around it. The second piece, ‘Stabat Mater’, is for mixed chorus and orchestra. The poem is in carefully constructed three-line stanzas with a complex rhyme scheme. Verdi maintains these short sections but allows his dramatic, operatic background to give each a musical character to match the meaning. ‘Laudi alla Vergine Maria’ for female chorus is a setting of a section of Dante’s Paradiso from the Divine Comedy. The switch to Italian seems to allow Verdi even more dramatic licence. The final piece is the liturgical ‘Te Deum’ for double chorus and orchestra. The power of these forces is immense.

Rejoice in the Lamb Op. 30 by Britten was written in 1943 and dedicated to Walter Hussey and the choir of St Matthew’s Church, Northampton. Christopher Smart (1722—1771), an English poet, was born in Shipbourne, of an old north country family. He spent much of his life in an asylum, producing long rambling works but with flashes of brilliance and philosophic genius. His extraordinary words provide a rich vein for Britten’s imaginative use of choir and soloists, admirably offset by the organ colour and drive. The cantata has ten short sections providing mystery, quiet elation, high energy and feverish ecstasy.

Iestyn regularly performs with the choir.

Originally from west Wales, Iestyn was organ scholar of St Davids Cathedral before going up to The Queen’s College, Oxford where he read music. After graduating he was appointed Organ Scholar of Westminster Cathedral and subsequently of Westminster Abbey whilst completing a postgraduate performance course at the Royal Academy of Music.

Iestyn is now Assistant Director of Music at the Cardinal Vaughan Memorial School in Kensington and Organist of St Etheldreda’s Church, Ely Place and in January will be moving to St James’s Church, Spanish Place. He is also conductor of the Hill Singers Chamber Choir in Wimbledon.

Amongst his more eccentric performances was a complete cycle of the organ work of J.S. Bach within twenty four hours last year when he raised over £6,000 towards a school tour to America.