Murray conducted the choir during its Magnificat! concert in January 2003. 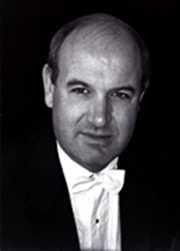 Born in London, Murray Stewart read Music at Cambridge University, where he was Organ Scholar at Trinity Hall. His early years were devoted to following a career as an Organist. Following studies in St Albans with Peter Hurford and later with Daniel Roth in Paris on an Arts Council Scholarship, he recorded the complete organ works of Cesar Franck, and works by Vierne for the Danish label, Kontrapunkt.

Murray Stewart is Artistic Director of the London Pro Arte Orchestra and the London Pro Arte Baroque Orchestra. With the former, he has conducted many Premieres, including works by Ropartz, Langlais, Sallinen, Kokkonen, Szymanowski, Howells, Patterson, Brian Chapple, Piers Hellawell, Geoffrey Burgon, Howard Blake, Naji Hakim and Robert Walker, all to critical acclaim. Murray Stewart is a former Conductor of the Collegium Musicum of London, where he succeeded Laszlo Heltay, Bristol Choral Society and the London Forest Choir. He was also Artistic Director of Finchley Children’s Music Group, with whom he gave the British Premiere of Pierre Max Dubois’ opera Le ruban merveilleux at Sadlers Wells, and appeared regularly on television. He is currently Music Director of the East London Chorus, and appears regularly as a Guest Conductor with other distinguished choirs at home and abroad, and has recorded with the West German Radio Choir in Cologne.

Since early days, Murray Stewart has maintained a strong interest in French repertoire of the late 19th and early 20th centuries. He has recorded two discs of music by Jean Langlais for Koch International. Murray Stewart also made the premiere Recording of Richard Maunder’s edition of the Mozart Requiem, in its entirety, and on modern instruments, as well as a Christmas disc for Conifer Classics, which enjoyed great success in the classical charts. He has conducted over 20 Premieres both at home and abroad, including works by Kenneth Leighton and Naji Hakim in concerts this Season. Future engagements include the World Premiere recording in Belgium of the Requiem Mass by Rodriguez de Ledesma, and concerts in Spain of music by Britten and Stravinsky. Murray Stewart has appeared with the London Pro Arte Orchestra in the International Orchestral Concerts Series at the Fairfield Hall, Croydon.