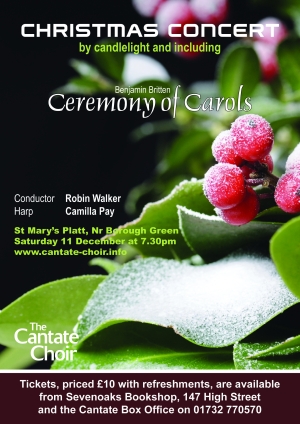 In 1939, Benjamin Britten was tired of the musical scene in England and in Europe. Though successful, he was not accepted as a foremost English composer as he deserved. Following on from Edward Elgar, there was a flowering of British composers working in a pastoral, neo-nationalist style: Bliss, Delius, Bantock, Finzi, Bax, and of course, the giant Ralph Vaughan-Williams. Britten’s style was altogether different; sparse and angular, influenced by the work of Berg, Schoenberg and Stravinsky, composers considered most unsuitable for a young English composer to admire.

Inspired by the work of the poet W H Auden, he set off for America. The two shared interests in politics, moral philosophy and the role of artist-in-society. Both had a technical mastery of their chosen medium bordering on the virtuoso. They collaborated on a number of successful co-ventures, notably his early operetta Paul Bunyan and the Hymn to Saint Cecilia. But Britten found America to have “all the faults of Europe and none of the attractions” and so, in 1942, he set sail to return to England. En route, he stopped in Nova Scotia, where he came upon The English Galaxy of Shorter Poems, a collection of medieval texts. Despite the difficulty and terror of a transatlantic crossing at the height of U-boat activity, he began setting some of the poems for boys’ choir and harp. These later became the collection we know as A Ceremony of Carols.

Britten had been studying the harp with a view to writing a concerto for that unique instrument. It was to be another twenty-seven years before he wrote his challenging Suite for harp, for his friend Osian Ellis. However, the writing in

A Ceremony of Carols is already masterful and entirely idiomatic. It is also a turning point when Britten looked to his English musical roots and a more populist and melodic style. Though he never lost his individuality and modernity, this won him a lasting place as a musical genius.

It is worth knowing something about writing for the harp in order to appreciate more fully this fabulous instrument and Britten’s handling of it. It is not just that thing which (normally) attractive young ladies play to pretty up ballet music with all the impressive flourishes. It is steeped in history and indeed mythology. Wasn’t Apollo, the god of music himself, a player of the harp? There are harps painted on the walls of Egyptian tombs. The small Celtic harps which adorn various types of ale are gentle souls, well suited to the accompaniment of folk tales and ballads. The modern pedal harp however is a complex and enigmatic creature. Orchestral musicians know to keep well clear, not just because they are beautiful and so, so expensive but because the owner invariably surrounds herself in an invisible sphere of mysterious doings; the lengthy and loving packing and unpacking; the solitary tuning of all forty-seven strings before each and every session; the studied setting of the pedals before each entry; the ability to read a novel (never a newspaper) without missing that one vital solo in the third movement! And, what’s more, they do not even use all their fingers! The pinkies can be held as daintily as the vicar’s wife with a tea-cup, for they will never be called upon to play a single note.

The double-action pedal harp was invented in 1810 by Sébastien Érard. It has seven pedals, one for each note of the diatonic scale. In the basic position, all the strings are flats: Cb, Db, Eb and so on. The first pedal position tightens all the strings to naturals and the second position to sharps. You do the ‘math’ on the possible combinations which can be achieved!

After the opening unaccompanied procession, Hodie Christus natus est, the harp opens up in very practical style; simple arpeggiated chords and evenly matched figuration between the two hands for Wolcum Yole!. In No.3 There is no rose we hear the resonant ostinato bass in octaves, which underpins this beautiful setting of these anonymous words.

Fully chromatic scales are difficult to produce on the harp but amazing effects can be created by tuning strings to the same note, for example ‘trilling’ on C# and Db creates a rapid repetition of one note. This effect is heard in No.4a That yongë child. In No.4b Balulalow, Britten makes good use of the natural resonance of harp strings. With other instruments, the note stops when you cease to blow or bow or the piano damper falls. The notes of a harp ring on unless you deliberately ‘stop’ them. The swinging phrases in alternating minor and major blur and blend in this lovely, luminous lullaby.

The closeness and smallness of the upper strings makes the whispering effect called bisbigliando very easy to achieve. In No.5 As dew in Aprille, it is just enough to suggest the near silent falling of the dew. Playing closer to the sounding board gives a bright, hard sound made more percussive with the rapid use of both hands as in No.6 This little babe. This suits well the aggressive words of Robert Southwell portraying the Christ-child as an avenging angel who will rout out evil and protect all those who follow Him. Playing in the key of Cb major, when all the strings are at their longest, gives the greatest resonance. This is the key Britten chooses for No. 7 Interlude for solo harp. Big chords are placed over dazzling, bell-like harmonics, another special feature of the harp.

In No.8, we hear again the nervous fluttering of harp tremolos in a repetitive 5/4 figure, which exactly captures the shivering and stamping of anyone watching the scene unfolding In Freezing Winter Night. No.9, Spring Carol for two sopranos, finds the harp at its most playful. The ability to skip around, especially in the upper register, is meat and drink to the harpist and captures the skittering and singing of the birdès and other creatures to perfection. The final accompanied Deo Gracias brings many techniques together for an exciting climax of thanksgiving, culminating in the exhilarating use of glissandi. Adam at last gets the credit he deserves, for if he had not taken that apple then Mary would not have produced the Son of God on earth. ‘Blessed be that time that appil takè was. Therefore we moun singen Deo gracias.’ Alleluia to that and a happy Christmas!