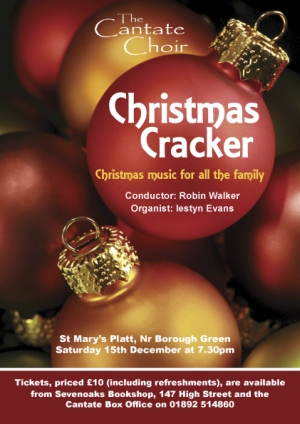 Let’s be honest! What most of us really want at Christmas is the same as we have enjoyed about every previous Christmas. However much we exclaim that this year we will not eat so much, buy so much or play the same games with Auntie Maud, we actually crave the timelessness of the traditions. The story of Christmas is 2,000 years old and the ways in which we celebrate and recall that are what bind us together as families and communities. They remind us that some important things are constant however much the world changes us or we change it. The peculiar feature of English carols, with their intriguing mix of English, Latin and French (sometimes in the same song!), also connects us to our Anglo-Saxon, Roman and Norman past.

That said, what we don’t expect is for people to save the wrappings and serve up this year’s pair of socks in last year’s paper! That is why in tonight’s concert nearly all the music will be familiar to you but wrapped up in settings which may be new or unfamiliar.

Celia McDowall demonstrates this beautifully for us in her Christmas Cantata, Christus Natus Est, which ends our programme. She takes five ancient carols in the three languages and sets them in new ways but not so strangely as to affront our sense of what’s fitting. She playfully links them with her own music, which remains true to the subtle mix of medieval and modern.

The least familiar may well be the four Christmas motets by Francis Poulenc. If you are not already a fan of this composer, become one immediately! Written in 1951-2 for unaccompanied choir, these are each a perfect miniature and typical of his style. Each one captures the mood of the traditional Latin texts with extraordinary precision and finesse. Imagine you are looking under a magnifying glass at the perfect gem settings in that amazing watch you have just unwrapped on Christmas morning. That is the music of Poulenc. Not a single note or dynamic or accent out of place. Understated so as not to be garish, subtle and rich enough to be breathtakingly beautiful.

A very happy Christmas to all our friends, especially to those who are kind enough to read my notes throughout our musical year!