Jonathan sang with the choir during its Magnificat concert in January 2003. 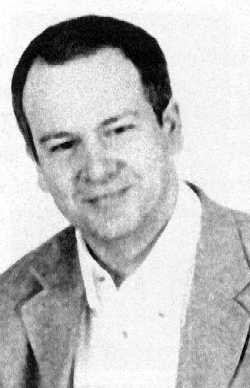 Jonathan May was born in Windsor and educated there and at Newcastle University. He then studied singing with Ellis Keeler at the Guildhall School of Music and Drama where he gained several scholarships as a post-graduate and member of the Opera Course. He also participated in Masterclasses at the Britten-Pears School with Martin Isepp and John Shirley-Quirk, and studied privately with Norman Bailey.

After working with Kent Opera, Jonathan joined the Royal Opera House Chorus, remaining there for three seasons, during which time he undertook numerous small roles including Hermann Les Contes d’Hoffmann and Venetian Guide Death in Venice. Other work during that period included Escamillo Carmen for Vivaldi Concertante, Geronte Manon Lescaut for Opera South and Basilio Barber of Seville for The Opera Company.

In 1997 Jonathan made his debut with Welsh National Opera as Zuniga in their acclaimed production of Carmen. Subsequently other roles for WNO have included Monterone Rigoletto, Gorianchikov From the House of the Dead, Mr Flint Billy Budd, Horn Un ballo in Maschera and numerous understudies. His debut with Scottish Opera as Zuniga in 1999 was followed by Angelotti Tosca and he returned to Scottish Opera for the 2002 season singing the roles of Bonze in Madam Butterfly and Samual Taylor Colerdige in the world premier of Monster, a new opera by Sally Beamish. Future plans include Traveller Curlew River for Opera National de Rouen and Polonius Hamlet and a Richard Strauss role for the Royal Opera House. Concert performances have included Pulcinella with City of London Sinfonia, Glagolitic Mass with Bournemouth Sinfonietta, Angelotti in Tosca with Bournmouth Symphony, Verdi’s Requiem at the Albert Hall with Sir David Willcocks, Haydn’s Creation and Mozart’s Requiem, (English Haydn Festival, Messiah in Singapore, Elgar’s Dream of Gerontius (Rochester Cathedral) and Berlioz’s Messe Solennelle at Dartington, and Handel’s Acis and Galatea for Huntingdon Choral Society.

You can read further detail on Jonathan’s personal website.