Amy sang with the choir during its Magnificat! concert in January 2003. 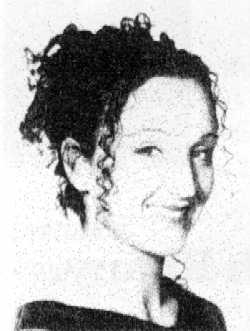 Amy Freston trained as a classical dancer at the Central School of Ballet and now studies singing with Sandra Dugdale at the RNCM. Whilst at the RNCM she has taken part ina number of the College’s opera productions including Verdi’s Falstaff (covering Nanetta), Sondheim’s Into the Woods (playing both Snow White and Rapunzal), Mozart’s Die Zauberflöte (covering the first boy) and Janàcek’s Jenufa (chorus and dancer). She performed the role of Asteria in the RNCM’s production of Handel’s Tamerlano and is a winner of the Alexander Young Award and the Brigette Fassbaender prize for lieder.

Recent engagements include the role of Galatea in Kent Opera’s Sprin 2002 production of Handel’s Acis and Galatea, the role of Sister Genevieve in Puccini’s Suor Angelica with Opera Holland Park, and soprano soloist in a performance of two Bach Cantatas and a Harrison Birtwistle song cycle, in the presence of the composer, at the home of Alfred Brendel this summer.

For Opera North Amy covered the Sandman and the Dewfairy in their Summer 2001 production of Hansel and Gretel, and last January sang the role of Pamina in a two-week workshop of Die Zauberflöte in preparation for their Spring 2003 production directed by Tim Supple. Amy also sang the role of Sophie in Der Rosenkavalier for a masterclass lead by James Holmes this November.

Amy is most grateful to the Countess of Munster Musical Trust and the Peter Moores Foundation for their generous support of her studies.