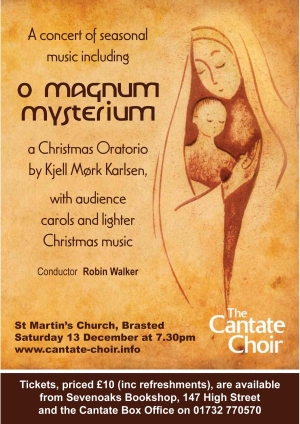 O great mystery, and wonderful sacrament, that animals should see the new-born Lord, lying in a manger! Blessed is the Virgin whose womb was worthy to bear Christ the Lord. – Responsorial chant from the Matins for Christmas

And, all o’ ye, whatever ye do, keep from making a great scuffle on the ground when we go in at people’s gates; but go quietly, so as to strike up all of a sudden, like spirits. – Thomas Hardy – Under the Greenwood Tree

There are two sides to Christmas, which are hopefully brought out in these two quotations and in our programme for you tonight. On the one hand we are reminded of the mystery of the story of the immaculate conception and birth of Jesus in the very poorest and humblest of circumstances, surrounded by animals and poor working men. On the other, we have a glorious evocation of the amateur musical efforts of later generations of yokels, who sought to give thanks for this blessed event through singing and playing in a tradition often known as West Gallery Music. While their sincerity shone through their often bumbling skill, it has left us a heritage of humour in our carol singing which lives on today.

West Gallery Music is a difficult genre to pin down but usually refers to certain English music of the 18th and 19th centuries, simple in nature and based on hymns and psalms for performance in and around church by voices and instruments (whatever came to hand). Sally Drage, who co-arranged the items of this type which we sing tonight, describes it as ‘the sacred music of provincial parish churches and nonconformist chapels, performed by and often written specifically for amateurs.’ The music has charm and sometimes humour and certainly is the kind to which Hardy referred or which Washington Irving recalled in Old Christmas: “…he has also sorted a choir, as he sorted my father’s pack of hounds…for the bass he has sought out all the ‘deep solemn mouths’ and for the tenor the ‘loud ringing mouths’, among the country bumpkins; and for ‘sweet mouth’, he has culled with curious taste among the prettiest lasses in the neighbourhood; though these last, he affirms, are the most difficult to keep in tune; your pretty female singers being exceedingly wayward and capricious, and very liable to accident.” Sounds pretty much like a Cantate Choir rehearsal to me!

Kjell Mørk Karlsen (b. 1947), by contrast, is a versatile and thoroughly professional musician but one who also ensures that he is inclusive of his audience. An oboist, organist and recorder player, he graduated from Oslo Conservatoire and has enjoyed a varied career as oboist with the Norwegian National Opera and as a keyboard musician with various orchestras and ensembles, such as the Oslo Philharmonic Orchestra and Collegium Musicum. He has taught at the Conservatoire, been cathedral organist and his interest in medieval and Renaisssance music led him to found Pro Musica Antiqua in 1969. It is hardly surprising therefore that, as a composer, he is drawn to sacred music, nor that it is a readily accessible mix of traditional texts set in subtly modern ways. His use of choral sonorities and organ ‘voluntaries’ pays tribute to the great traditions of Renaissance and Baroque church music but with a freshness and perhaps a coolness, which we might expect from his modern Scandinavian roots. The use of a narrator, however, is entirely his own and brings a directness to the telling of the Christmas story and engages the audience, where more formal vocal traditions of oratorio perhaps do not.

The narration provides a detailed account of the prophecy, conception, birth and first few days of Jesus’ life using bible texts. The organ’s role is to accompany and amplify the storytelling. The choral sections are unaccompanied meditations using well-known latin texts:

O magnum mysterium – O great mystery
Universi, universi – Lord, let none who await you be ashamed
Ave Maria – Hail mary, full of grace
Magnificat – My soul magnifies the Lord and my spirit rejoices in God my saviour
Puer natus est – A child is born to us and a son is given
Gloria in excelsis – Glory to God in the highest and peace on earth
Quem vidistis? – What did you see shepherds? Tell us.
Nunc dimittis – Lord, now lettest thy servant depart in peace

It is perhaps telling that the only times the organ and choir come together is for the words Gloria Patri et Filio Sancto – Glory be to the Father, the Son and to the Holy Ghost: As it was in the beginning, is now and ever shall be, world without end, Amen.

A Christmas Celebration is a collection of carols from Georgian England in the West Gallery style. Our second half begins with three:

Hark how all the welkin rings arranged by Thomas Butts using words by Charles Wesley. Welkin is the vault of Heaven, implying a very loud sound if you can set it ringing. I never knew that!

The Branch, the mighty branch behold, attributed to John Reynolds, is a wordy little number which would have taxed the bumpkins in the extreme (and still does!). It tells of the nativity.

A Christmas Anthem by William Matthews of Nottingham is an exhilarating setting of words by Charles Montgomery, which you will recognise.

The final set for the evening takes four settings from the tried and trusted collection of Carols for Choirs, edited and arranged by Reginald Jacques and David Willcocks. Not enough homage is paid to these two connoisseurs of the English caroling tradition. Four books of fine compositions and arrangements that allow every Christmas to be different yet reassuringly the same.