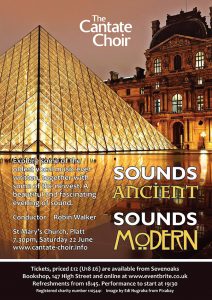 For our summer concert this year we explored styles of music which challenged us to get out of our comfort zone. We sang music which bridges over 900 years, opening our concert with music by one of the most important and influential composers in history, Hildegard von Bingen, followed by a work by Stevie Wishart written only a few years ago based around that ancient music. Stevie explores the Medieval sound-world through texture and vocal effects to create a rich and elaborate soundscape, reminiscent of monastic chant and ancient buildings.
A ‘first’ for Cantate was a programme which features exclusively female composers, and we performed music from the Renaissance and the 19th century, with pieces by perhaps the most well-known female composer of the last century, Amy Beach. We concluded our programme with two works by Lauren Redhead, performing one work which is a cappella and a second in which we had an element of improvisation and which we performed with electronics Lauren created especially for this performance.
This was a particularly exciting concert for the choir, working with two contemporary composers exploring the real cutting edge of vocal performance; it challenged us to try a whole new approach as a choir and led to an exciting and enjoyable evening.