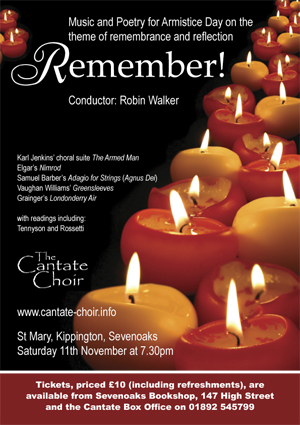 The Armed Man must be feared; Everywhere it has been decreed
That everyman should arm himself, With an iron coat of mail.
Anon, c1450-1463

The fifteenth-century French song, L’homme armé, gave rise to a tradition of Armed Man masses still alive today. The idea that the armed man must be feared seemed as painfully relevant in the twentieth century as in the late Middle Ages. Karl Jenkins, commissioned to write a Mass for Peace, saw an opportunity to look ahead with hope and commitment to a more peaceful millennium. But even as he was writing it, the tragedy of Kosovo unfolded. The first CD was released, ironically, on September 10th 2001. The complete mass includes words from the Koran, British poets and the Hindu Mahabharata. Musical styles as diverse as the words sit fairly comfortably together. The Choral Suite consists of the Kyrie, Sanctus, Benedictus, and Agnus Dei from the Mass and a final Hymn before Action by Rudyard Kipling. We are interspersing these choral movements among the poems and music of our concert tonight, which invites us all to remember, to be grateful and to have hope.

The first two-minute silence was held on November 11th 1919, when King George V asked the public to observe a silence at 11am. Since the so-called ‘war to end all wars’, and during a century of further conflict, this date has become the nearest we have in this country to a National Day. It has been said that all post-war memorials feature two motifs – ‘war as both tragically, unendurably sad and noble and uplifting’. Is there some explanation here of why the very island character, explored in our last concert, also means that remembrance of war, resistance to invasion and the heroism of struggle are what seem to bind us together as a nation when other ideals do not? Certainly, English-language composers do ‘unendurably sad and noble and uplifting’ extremely well.

The first half of the programme deals with the nostalgia and pity of war. Greensleeves is an old song, thought to be penned by Henry VIII. It looks back wistfully at the loved one, who is out of reach. ‘I have both waged life and land, your love and goodwill for to have’. This arrangement by Ralph Vaughan Williams is sumptuous and yearning.

Samuel Barber wrote his Adagio for Strings in 1936, apparently inspired by the idea of a stream growing in size to a full river. However, it quickly became an anthem of mourning, especially in this choral version setting the words of the Agnus Dei. ‘Lamb of God, who takes away the sins of the world, have pity on us, grant us peace.’

John Ireland carefully crafted his short anthem Greater Love hath no Man with words from no less than seven sections from five books of the Bible: Song of Solomon 8, St John 15, 1 Peter 2, 1 Corinthians 6, Romans 12. Written in 1912, it must have provided enormous comfort as more and more young men set off abroad ‘for King and Country’. Over one million never returned.

Folk songs took on a particular importance in the early part of the century. Many composers set about collecting and setting down the large canon of songs from all around the British Isles. Popular songs from the music halls also seemed more stirring than a rather lack-lustre National Anthem. Little wonder that soldiers and their girls felt more moved and patriotic when singing a rousing chorus of ‘It’s a long way to Tipperary’ or ‘D’ye ken John Peel’. Our representative sample is a wordless setting of the Londonderry Air by Percy Grainger.

Nimrod Borenstein is an Israeli-born composer who lives and trained in Britain. His works are popularly performed here and abroad and are considered to belong to a New Consonant Music. Composers such as Steve Reich and Michael Nyman moved away from the former complexity of ‘modern music’ for simpler styles that performers and audiences could understand. This setting of Psalm 139 explores the idea that wherever we go the hand of God will be there to guide us. Even if darkness surrounds us it will be as the light and ‘the night will shine like the day’. The piece is broadly tonal although different voice parts can be in different keys simultaneously. For much of the setting, the sopranos provide the melodic and lyrical line, while the lower voices build shifting textures from the sometimes disjunct words. He also makes use of words for rhythmic motion rather than meaning, however the overall journey from darkness to light is unmistakeable.

Nimrod is the ninth of Elgar’s Enigma Variations. Nimrod the mighty Hunter of the Old Testament stands here for A J Jaeger, of the Novello publishing company (Jaeger means huntsman in German). Jaeger mused to Elgar that no-one could match the slow tempi of Beethoven’s great slow movements, Elgar set out to prove him wrong. With its ever rising repetitions and painfully falling intervals of the seventh, the piece epitomises ‘unendurably sad and noble and uplifting’ and has come to be a piece associated with state mourning, much as Barber’s Adagio has in America.

Herbert Howells lived for ninety years but felt himself a composer out of his times. His style harks back to that exceptional period of English choral music, to Tallis and Weelkes, to the subtle swings of minor to major, to unexpected false relations resolving to glorious concordance. In fact the modal swings between major and minor are intrinsic to the traditional English folksong and the musical revival of the twentieth century, thus making Howells very much a man of his times. He described his music as full of the ‘agony and the ecstasy’ and our final anthem from Psalm 42 certainly combines these two ideas. ‘My tears have been my meat day and night… where is now thy God?… my soul is athirst for God… when shall I come before the presence of God?’