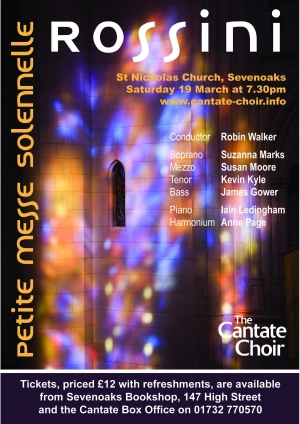 Thou knowest, O Lord, as well as I, that really I am only a composer of opera buffa. Rossini, dedication to Petite Messe solennelle (1864)

This is also the man who variously said, “Give me a laundry list and I will set it to music”, “Every kind of music is good, except the boring kind” and, my favourite, “One can’t judge Wagner’s opera Lohengrin after a first hearing, and I certainly don’t intend to hear it a second time.” Are you getting a picture of whom we are dealing with here? Gioacchino Rossini has to be one of the most outrageous figures in the composers’ archive.

He was notoriously idle and slapdash. His successes were approximately equal in number to his failures. A third of his operas at least are just rehashes of earlier works. Everywhere he went, he ran into trouble with critics, audiences, mistresses, even the Austrian secret police and he seems to have scarpered all over Europe at various times escaping this or that ‘local difficulty’. His productive life as a composer was short, only about twenty years, during which time he wrote 38 operas, 19 sacred works, some 13 instrumental works and numerous songs.

From about 1829 after the composition of William Tell, he fell into a period of ill health, both mental and physical. He did not write another opera or barely another note until his old age. At the same time, he seems to have amassed a fortune and gained numerous rewards and honours. He had a knack, it would seem, of getting a lucrative contract to produce a work, which never materialised. By the time this might be a problem, he had re-located elsewhere in Europe. The less he did, the more people liked him. He lived like a modern celebrity, if you ask me, getting away with extraordinary infelicities because we just love his tunes and he makes us feel good!

The Petite Messe Solennelle was written in 1863 to inaugurate the private chapel of the Count and Countess Pillet-Will and had its first performance on 14 March 1864. Scored for chorus, soloists, piano and harmonium, Rossini described it as the last of his ‘sins of old age’. The harmonium was invented and patented by Alexandre Francois Debain in 1841, used for the first performance and it is a Debain harmonium of the same period, which is played tonight by Anne Page. Thus we are directly linked to the composer’s sound world in this performance. The harmonium was created to give a reed organ capable of expression, ‘une orgue expressif’.

A five octave keyboard, with four sets of reeds, the bellows are directly controlled by the player through the pedals and thus she can control the air pressure passing through the reeds. For much of the work, it provides the legato glue in the piano’s bouncy and percussive contributions.

It has been said that this piece needs just a small hall, piano, harmonium, a small group of choristers and the four greatest soloists on earth! Certainly, they need extraordinary stamina for they are expected to double up with the chorus in their seven numbers and sing their own solos and ensembles in the other six. So take a deep breath and let’s get going!

Part 1 begins of course with Kyrie (Lord have mercy upon us), a teasing opener with long suspenseful lines in the chorus over a constantly chugging piano bass. Suddenly, this stops and Christe eleison (Christ have mercy upon us) is a surprising piece of polyphonic, a capella writing in Renaissance style. The Kyrie returns and moves now into a major tonality, as if Rossini is getting comfortable with this Mass business.

The Gloria (glory to God on high and peace on earth to men) is assertive and operatic and spiritual in a kind of Sound of Music way. Close your eyes and you can picture the scene. This is followed by a trio for alto, tenor and bass with piano, Gratias agimus tibi (we give thanks to You). This begins in a pleasant enough manner but builds into a richly contrapuntal texture that is most satisfying.

Domine Deus (Lord God, King of heaven, only begotten son) is a tenor solo. Such a piece might be the kind which prompted Beethoven to tell Rossini to stick to writing comic operas! Especially as the tune is almost a perfect copy of one found in Beethoven’s string quartet Op.18 no.4. Is he ‘aving a laugh?

Soprano and contralto soloists restore a suitable mood in Qui tollis (who takest away the sins of the world) and we can picture here two strong but worried women on stage grieving for the state of the world but placing their faith in God. The bass picks up his aria as the wise counsellor coming onto stage for Quoniam (Thou, Lord, only art holy). Always so reassuring to have a man around in troubled times! The chorus returns to the opening Gloria music and extends it for Cum sancto spiritu (with the Holy Spirit, the glory of God the Father). This is the most chirpy and life-affirming Amen you will ever hear.

Part 2 begins with the Credo (I believe in one God). This feels like more orthodox 19th century sacred music but Rossini cannot resist some dramatic recitative style at ‘and was made man’. This sets up the next aria Crucifixus to be sung by the soprano in a lyrical, amoroso style. Now our heroine is kneeling at the foot of the cross for sure. The chorus puts a stop to this with the words Et resurrexit (and arose on the third day) and then takes us on a lengthy romp through the remaining words of the creed.

The instrumental Preludio religioso is the most heartfelt section of the whole piece. Why this complete change of mood? Was the elderly Gioacchino beginning to think that you cannot entirely laugh off life, death and that which is to come? Certainly the choral Sanctus which follows is short and unconvinced compared with most Masses. Rossini inserts O salutaris hostia at this point. This is not normally in the Mass. It is a hymn of benediction but he only sets the first verse which has us beset by foes and hoping for the best. Oh dear!

The final section Agnus Dei (Lamb of God, who takest away the sins of the world) needs to come up trumps for us, and for a while…..but, no, I will not give away the ending!